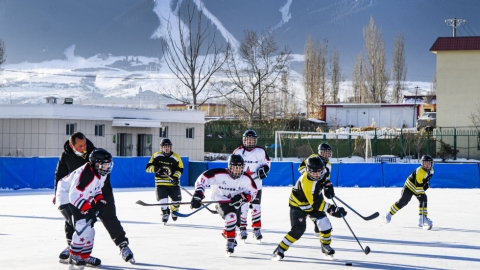 Dressed in a stylish snowsuit and ski goggles, Li Yang, 32, took a leisurely stroll and tasted the intoxicating pleasures after hurtling down the slope at a ski resort in Huai’an City, in eastern China.

“It’s just fashionable and cool to feel the joy of winter sports ahead of Beijing 2022,” said Li, an IT engineer who drove three hours from Nanjing to attend a local ice and snow festival, in the hope of relaxing a little from the daily grind. .

“It’s the second time I’ve been here. The difference is that I bought my own equipment this time rather than renting it. Many of my friends now have their own equipment,” Li said.

With the Beijing Winter Olympics officially kicking off on Friday, Chinese manufacturers have long seen a golden opportunity as the Games generated unprecedented enthusiasm for winter sports and the country rolled out multiple policies to improving infrastructure and encouraging innovation.

More than 346 million Chinese have participated in winter sports activities since Beijing’s successful bid in 2015, surpassing the country’s goal of engaging 300 million people in winter sports, according to the National Bureau of China statistics.

China has also experienced explosive development in recent years despite its late arrival in winter sports. China now has 654 standard ice rinks, a 317 percent increase from 2015, and the number of ski resorts reached 803, up from 568 in 2015.

All this fuels the business of equipment manufacturers and bodes well for the long-term market. According to China’s development plan, the total scale of the country’s winter sports industry will reach 1 trillion yuan by 2025.

A growing number of stores selling winter sports equipment, including suits, helmets, gloves and snowboards, are popping up in major Chinese cities, although sometimes the prices of ski-related products are considered like a little high.

“For average skiers, a complete set may range from 2,000 to 10,000 yuan, but I think most buyers are white-collar workers, earning more than 10,000 per month,” said Wang Juan, sales manager in a chain store in downtown Nanjing.

Data from JD.com online market showed that during last year’s “Double 11” shopping festival, orders for ski-related equipment on the platform were 23 times higher than the previous year. , while the volume of transactions for ice sports equipment increased 15 times year-on-year.

“The Winter Olympics are obviously a catalyst for equipment trade, and also a stepping stone for equipment manufacturers,” Wang said.

Li Longtai, executive vice president of Chongli Thaiwoo Ski Resort, said more than half of visitors now bring their own equipment. “Young people have become the main consumers, indicating that the market has diversified and the consumption capacity of the new generation has increased.”

Chinese brands are trying to position themselves in the windfall. Sportswear giant Anta Sports, sponsor of the Beijing Games, has used its deep pockets to partner with European gear brands. Domestic brand Bosideng has also cooperated with German brand Bogner to set up a joint venture, planning to build around 80 stores across China.

A number of clothing brands like Toread and 361 Degrees have released their own ski suits, and others, including Running River and Vector, produce a variety of personal ski gear.

In the fast lane

A research and innovation consortium of 12 industrial units has been set up to manufacture the homemade bobsled from scratch, including using space technologies, the administration’s Winter Sports Management Center said. General of Sports of China.

This was indicated by a meeting organized by the Chinese Ministry of Industry and Information Technology (MIIT) last November, which aimed to promote standards for the production of equipment such as snowmobiles, snow guns and groomers.

As venues with scientific and technological innovations for Beijing 2022 have been built one after another, Chinese-made snow guns, smart ski simulators and ropeways have been widely used in ski resorts across the country. .

Encouraged by sets of government policies, Chinese winter sports equipment manufacturers have stepped up efforts to promote research and development in recent years. In 2019, the number of new homemade snowmaking machines at Chinese ski resorts rose to 467 from just 50 in 2015, according to a white paper on China’s ski industry.

Although China’s winter sports equipment industry still lags behind many countries, it remains one of the most promising winter sports markets in Asia and even the world, according to a MIIT official, who believes that Chinese manufacturers should achieve differentiated product competition. which can better satisfy the demands of the Chinese market.

The global surface water sports equipment market is expected to grow by USD 11.21…