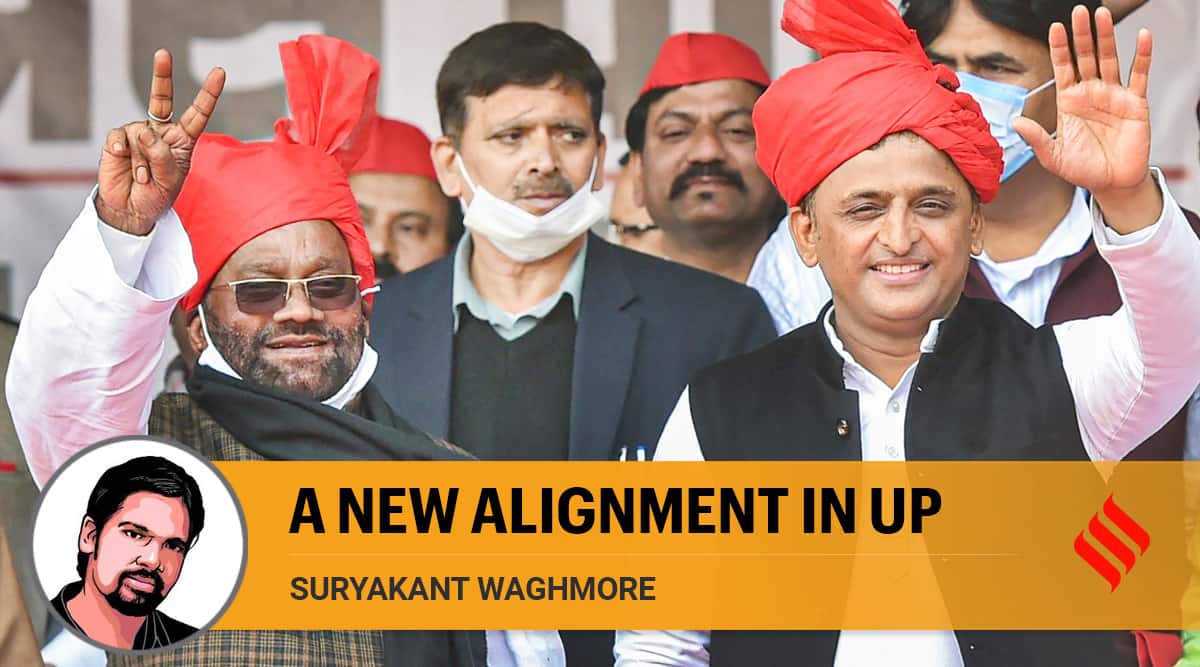 The move of Swami Prasad Maurya and Dharam Singh Saini to the Samajwadi party must be a pressing concern for the BJP. In many ways, the OBCs form the cornerstone of the BJP in Uttar Pradesh. While ‘pure castes’ (Max Weber uses this term to refer to ‘upper’ castes) like the Thakurs and Brahmins will continue to pledge their support to the BJP in the upcoming assembly elections, the party’s future in the UP rests largely on the shoulders of the CBOs.

The last five years of Yogi Adityanath’s reign saw an elected Thakur priest transform the state apparatus into a temple apparatus, with privileged and exclusive access for certain castes. What has been extraordinary is the apparent submission of Muslim and Dalit citizens to this caste-temple-state nexus. The use of force by the state against anti-CAA protesters (Muslims) and even farmers (dominant middle castes) and the use and abuse of sedition laws are seen as both a moral and martial victory for the “upper” castes. The damage inflicted by mismanagement at state and central levels during the first and second waves of Covid-19, rising fuel prices, inflation, job losses and a crumbling economy have had devastating consequences for all castes. But elections are not just about rational economic choices. Caste morality is also at stake. The normalized anti-Muslim, anti-Constitution rhetoric is a sign of concern among privileged castes, who perceive their social power to be under threat, and the BJP remains the only rational choice for most people. ‘between them.

With several cases of caste atrocities being reported and highlighted in the (social) media, major groups among the scheduled castes may, arguably, not vote for Yogi. While the BJP-RSS emphasizes inclusiveness for Dalits, if not tempts them, the power vested in the temple-state apparatus invariably releases caste feelings against these groups. The Yogi Rule sent a message that Scheduled Castes cannot be Hindus in substantial social life – their inclusion can only be political and decorative. Mayawati may well continue to be the first choice for SCs in UP.

The attraction of Hindutva among OBCs, on the other hand, is driven by their closeness to Brahmanism. Despite the mandalisation of politics in North India, OBCs are more politically dispersed and do not constitute a politicized collective. What we have, therefore, are individual caste-centric parties like the SP that develop pragmatic political patronage and alliances with other castes and Muslims.

Material opportunities and advances in a neoliberal economy coupled with an increased presence in the structure of the state have, over the past three decades, led to a major intermingling among OBCs. A sense of Hinduism driven by anti-Muslim sentiments was mobilized under the BJP’s nationalist Hindutva Project. Along with their material and political advancement, this evoked a sense of closeness to the “upper caste” Hindu social world among the OBCs. However, the BJP rule of the past five years in the UP may have led to a sense of brotherhood among the different castes identified as OBC.

All of this may have started with Yogi “purifying” the CM residence during the evacuation of Akhilesh Yadav and subsequently showing the Yadavs their “place” in many ways. The reservation to “upper” castes (EWS) and the under-representation of OBCs in the state apparatus have mobilized a collective feeling among OBCs. The SP makes the most of this by forging alliances with similarly placed castes.

The consolidation of OBCs under the SP, even if temporary, may be a harbinger for Akhilesh Yadav’s recovery and simultaneously point to the possibilities of a new collective identity among OBCs. Moreover, the RLD aligning itself with the SP added the advantage of the “farmer” (Jat) to the political campaign of the SP. While the SP appears to be leading the pack of opposition parties at the moment, all opposition parties could also consider the possibility of a deadlocked assembly.

The consolidation and politicization of OBCs and the creation of a new collective identity could be a positive long-term political development. However, the upper OBCs are like “pure castes” in the making, or at best they overlap with different aspirations. And Akhilesh Yadav’s dreams are a signifier of this overlap – he recently dreamed of Lord Krishna assuring him of a “Ram Rajya” under his guidance. Yadav has also promised in the past to “repurify” the CM residence once Yogi Adityanath leaves the premises.

In this battle for Ram Rajya across castes, who wins remains to be seen. One only hopes that constitutional principles and morality will not continue to be a victim.

This column first appeared in the January 20, 2022 print edition under the title “A New Alignment in UP”. The writer is Professor of Sociology, IIT-B